Should Christians Care About Politics? | Teach 4 the Heart

Should Christians Care About Politics?

What do you think? Should Christians worry about politics? Should they vote? Should they call their elected officials over key issues? What about helping candidates campaign? Or even running themselves?

I’ve heard the argument that Christians need to focus on evangelizing the lost instead of politics, but I have to say, I’m not buying that. 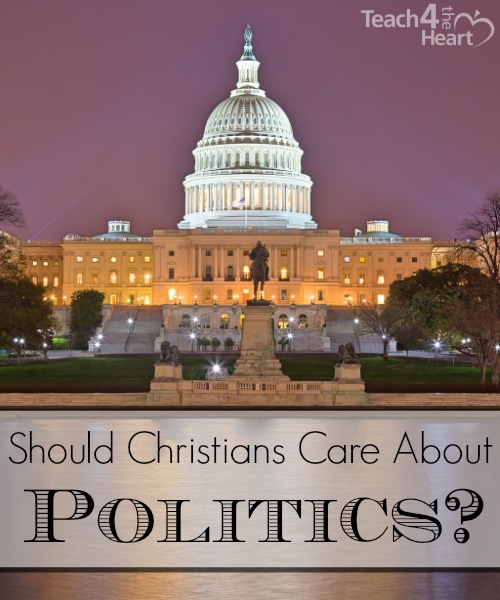 First of all, God cares about politics. You don’t believe me? Well, just think about how much of the Bible deals with laws, kings, or rulers. Think Moses before Pharaoh, David and his mighty men, and Daniel standing before the Babylonian rulers.

To whom did God send His mighty prophets? Not just to the common people but more often than not to the kings and to the rulers.

And it wasn’t just the nation of Israel that God was concerned with. He sent dreams and visions to the Babylonian kings and sent Paul to testify before King Agrippa, Felix, and even Caesar.

If God doesn’t ignore the realm of politics, why should we?

God Gives Each of Us Different Gifts and Passions

God has a plan for each of us, and each plan is different. Yes, every Christian should be working to evangelize the lost. But that doesn’t mean that God doesn’t want us to have significant influence in other areas as well.

Should a doctor not try to influence medical ethics because he should be out soul winning instead?

Should a non-profit director stop building wells in Africa because he should be witnessing to his friends instead?

This argument makes no sense. It is not an either-or. God uses us in a variety of ways to be salt and light – to have an influence for good on those around us and in our culture at large.

So why shouldn’t we make a difference in an area that has significant impact on all of our lives – and that even determines our freedom to evangelize?

WE are the Government

So maybe it’s okay for Christians to be involved in government, but does that mean that we SHOULD be?

And we the people have desperately failed our nation.

Yes, we like to blame the politicians, but who put them in office?

This is our government, and we need to remember that the only thing necessary for evil to triumph is for good men to do nothing.

So What Should We Do?

There is a lot that we can and should do, but we can all start with three simple things

Do you agree that Christians should care about and be involved in politics? Why or why not?