4 unusual tips to cut out tantrums & teach preschoolers to obey

Let me start by saying that I have way more experience dealing with tantrums than I care to admit.

My precious two-year-old has inherited some serious anger issues and occasionally (okay, often) will throw an all-out tantrum such as the world has never seen. 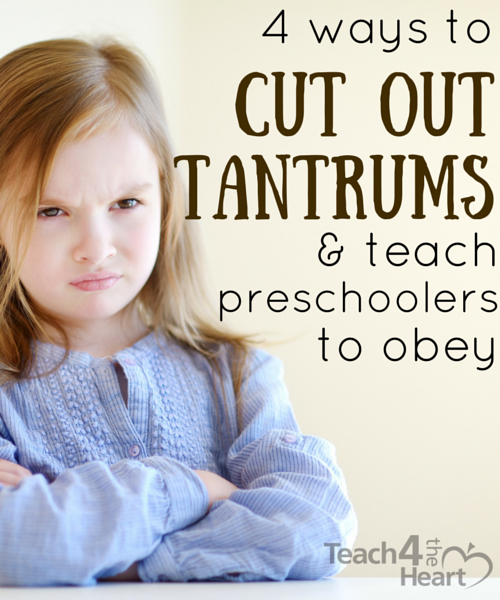 I have, however, learned a few techniques that have helped us tremendously and that maybe (just maybe) will help you, too.

4 tips to cut out tantrums & teach preschoolers to obey

Of course we could also talk about being consistent, having consequences, and addressing problems while they’re small – all super important, but you probably already know that. I just wanted to share a few unique ideas that have been helping us lately in hopes one or more may resonate with you.

Our work is not in vain.

After I wrote this post, we continued to make gradual progress but still saw lots of challenges, too. He would be much better for a few months and then fall back into a string of fits. Once, as a 3 year old, he threw a huge fit in the grocery store over a piece of candy. It was so bad that the workers had to help me get him to the car (there’s no way to carry a screaming toddler & a baby at the same time.)

So our track record was pretty up and down until I was talking with one of my friends about anger in kids. I suddenly realized I had been dealing with the results of the anger & trying to get him to handle it correctly, but the real problem was the anger itself, not just what he did with it. So…..

#5: Teach them to get the anger out of their heart. I sat with my son and talked with him about how anger gets in your heart & how it makes you scream and throw fits. I taught him that when he gets upset he needs to tell the anger to get out of his heart. We said it out loud, “Get out, anger!” For the next few days, every time he got angry, we talked about getting the anger out of his heart & he’d tell it to get out. The change was immediate and astonishing. Normally it calmed him down immediately. When it didn’t, we’d pray and ask Jesus to help him get it out.

I can’t even believe how much this one thing has changed things. The other tips are great, but this has made the single biggest difference. It’s been a few months now and I actually can’t remember the last time I had to remind him to get the anger out of his heart. It still happens, but it’s more of an occasional thing than a constant.

I’d totally recommend you try this. And think about how it applies to other situations too. I’m now trying to think about what the root problem is and deal with that first before I try to deal with the external results of the problem.

What advice do you have for parents or teachers who are working to teach preschoolers how to obey? We’d all love to hear it!!

How God is Leading Us at Teach 4 the Heart

Help Your Kids Experience the Joy of Giving this Christmas