Why We Should Expect Way More of Our Teens

Why We Should Expect Way More of Our Teens

Why do we expect so little of our teens? We expect that they will be somewhat lazy, that they will get into trouble, and that they probably won’t get serious about the things of God until they are older. We figure that they aren’t really ready for a lot of responsibility. They’re just kids after all, right? 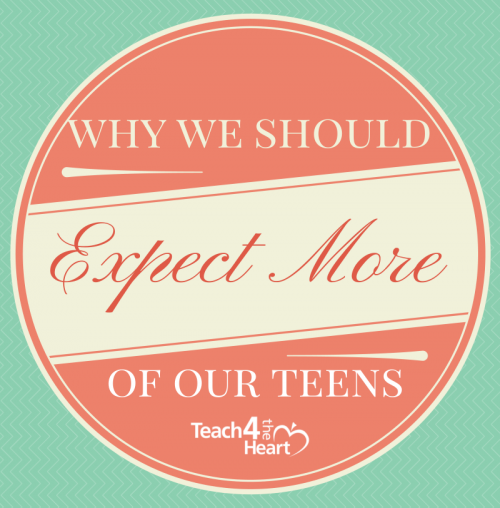 And this trend is just getting worse. These days even young adults aren’t expected to be responsible or to contribute to society. You’re twenty-five? Oh, so you probably are still living with your parents rent-free, casually deciding on a career, and wasting the best years of your life finding yourself, right?

We don’t expect people to really settle down, get married, and/or get serious about their life until – when? 30? Is it 35 now?

What is going on?

Teenagers are capable of a lot more than we think they are. But that’s just the problem, isn’t it? If we don’t think they’re capable of much, then they’re probably not going to prove us wrong, are they?

So maybe we need some examples from American history to give us a taste of what teens can actually do:

The attitude of their culture was different. They were expected to contribute.

There was nothing different in the water that made these teens particularly responsible and courageous. But the attitude of their culture was different. They were expected to contribute. They were given responsibility – and they fulfilled it incredibly.

If Then, Why Not Now?

What would happen if we started expecting more of our teens? What if we presented these young people as examples and started inspiring today’s teens about what they can do – not when they’re 30 but right now?

What if we started giving them more responsibility in our homes, our churches, and our schools?

I think we’d be quite impressed with the quality of work that some of our teens would produce. I think we’d be thrilled to see what they truly are capable of when given an opportunity and someone who believes in them.

It’s all about expectations.

When we assume kids are going to make a mess of things, why would they do anything different?

Our expectations tend to form our reality. When we assume kids are going to make a mess of things, why would they do anything different?  But if we expect more, tell them we expect more, and show them how to do more, we might just be amazed by the results.

I recall one of my 8th-grade students who was basically in charge of running the sound board for school productions. This was no simple tasks – arranging microphones, checking batteries, and training other students to help. But he did a fantastic job. He wrote an essay once about how people are so surprised that he has this responsibility as a junior-higher, and he argued that most people just don’t expect enough of young people.

But What About the State of Today’s Youth?

Now I know that in general the state of today’s youth is abysmal. And while I could argue that maybe that’s our fault for expecting so little of them, that’s really not the point.

The point is that we have the opportunity to teach the young people in our lives to be different – to be responsible and productive. To be leaders. To be exceptional.

Think about your own home, your own school, your own church. Are there particular teens that you can help mentor? Is there someone that you can start gradually giving responsibility and teaching them how to handle it?

We Need to Train Leaders

This country desperately needs leaders – and I don’t just mean political leaders. We need strong leaders who will stand for what’s right in business, medicine, education, and the pulpits of America’s churches. We need charity organizers, business owners, and stay-at-home moms who are ready to make a difference in their sphere of influence. And, yes, we need people of character and integrity to influence the public sphere of politics.

We need our young people to be incredible.

Simply put, we need our young people to be incredible. We need them to make a difference in our families, neighborhoods, and country. We need them to be strong leaders of faith who will stand for what’s right and not be afraid.

And it all starts by changing our expectations.

Have you fallen into the trap of believing that young people just aren’t capable of much? Or have you seen an example in your own life of just how capable teens can be? Share your thoughts and experience with a comment below.

Special thanks to Tim Barton of Wallbuilders for sharing information about capable teens in American history.

Help Your Kids Experience the Joy of Giving this Christmas