Is Our Focus on Bullying Producing More Victims? | Teach 4 the Heart

Is Our Focus on Bullying Producing More Victims?

Before I get too far, let me make one thing crystal clear.

There are no if‘s, and‘s, or but‘s about it. Kids should not harass, hurt, or make fun of other kids. It’s simply not right.

And since it’s not right, we as teachers definitely should be on the lookout for bullying. We should deal with it firmly when it happens and do all that we can to prevent. 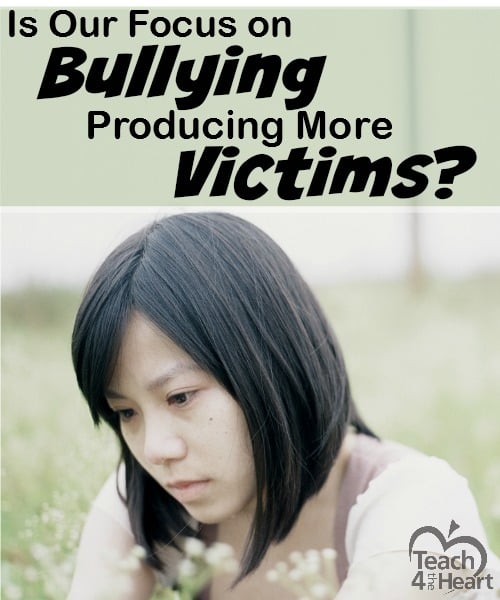 But having said all that, I have to say that I have a major concern with the direction all this anti-bullying focus is taking. Because it seems like it’s producing a terrible byproduct – victims.

Are We Producing a Victim Mentality?

I’m thinking of the kids who are moping around feeling sorry for themselves because they are bullied. They are being picked on, and there’s just nothing they can do. Except tell the teacher – then she can also feel sorry for them and and hopefully stop the bullying.

But there’s a few problems with this.

I’m just wondering if we should start spending just as much time teaching students how to correctly handle being bullied as we do trying to eliminate bullying.

First of all, bullying isn’t going anywhere. Now don’t get me wrong. I’ve already said we can and should do everything we can to prevent it and to disrupt it. But the reality is that there will always be bullies. It’s just part of life. And I’m just wondering if we should start spending just as much time teaching students how to correctly handle being bullied as we do trying to eliminate bullying.

Which brings me to the second problem – feeling sorry for ourselves doesn’t help anything. Sure,  a good pity party feels good for awhile, but in the end it solves nothing. And I’m concerned that students – having heard so much about how bad bullying is – when they are bullied (whether it be real bullying or just general teasing) quickly develop a “woe is me” attitude and label themselves a victim of bullying.

And I’m sorry, I’m just not okay with that.

When a student views himself as a victim (and we stand by and allow it), it robs him of the opportunity to learn from the experience. To learn how to respond gracefully in the midst of adversity. To learn how to stand up for himself without being a bully as well. To develop strength of character and resilience. To realize that maybe they themselves are contributing to the problem.

A Case in Point

I’m thinking, for example, of “Brad,” a middle schooler who is being picked on by some students in his class. He feels like he is being bullied and is tired of it. His mom is very concerned and feels his teachers aren’t doing enough to stop the teasing. Brad ends up crying all the time about it and wants to escape the bullies by transferring to the local public school instead of the private Christian school he currently attends.

Nevermind that Brad himself isn’t always nice to his classmates. Or that he gets upset easily. Or that he is, in general, super hyper and loves to do silly things to get attention.

He is being bullied and he doesn’t like it.

Okay, now aren’t there a few problems here? Now as I said – his classmates are absolutely wrong to pick on him and make fun of him. But this is middle school – it’s gonna’ happen. My concern for Brad is that he’s going to switch schools in a desperate attempt to escape the bullies only to find himself in the exact same (but actually probably much worse) situation in the local public school.

You see, the answer here isn’t just trying to stop the other kids from making fun of Brad. Yes, it should stop. But what Brad really needs is for someone to sit down with him and help him learn how to be a victor instead of a victim.

I could go on and on, but I don’t want to write a book here. I guess I’m just trying to shine a spotlight on the other side of the bullying issue. We need to do more to teach our students how to respond to being bullied – and I mean way more than teaching them to tell an adult. And we especially need to help them learn how to deal with interpersonal issues that they perceive as bullying but are actually just normal personality conflicts that we all face.

I don’t have all the answers, but I do think it’s time we start a conversation. So what do you think? Are we failing the “victims” of bullying? How can we better help them rise above the difficulties and become victors instead of victims?

Worried about Your Students? Read this.

End Your Year with this Engaging (yet simple) Distance-Learning Project

4 Questions to Know When to Give Grace as a Teacher